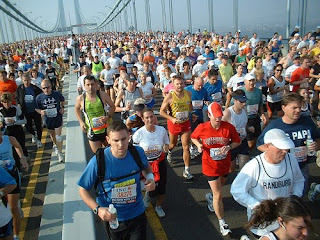 I've been putting off committing to competing this year since I'm still trying to recover from flaking out of Chicago last year. Nonetheless, it's a near year and Ashley has set the bar. As I've said before, I'm not really the competing type of girl, but there's absolutely NOTHING like running in races. So for that post-run excitement I will inevitably feel afterwards, in 2010, I will run the following:
February 27: 7th Annual Land Rover Nashville Judicata, Nashville, TN
April 10: Purity Moosic City Dash 10K/5K, Nashville, TN
April 24: Country Music Half Marathon, Nashville, TN
November 7, 2010: ING New York Marathon, New York, NY

Like Ashley, I'm planning to add some small races along the way, but these are definitely a go! Wish me luck, and of course, if you're running in any of these races, let us know!