Defeated by the Windy City 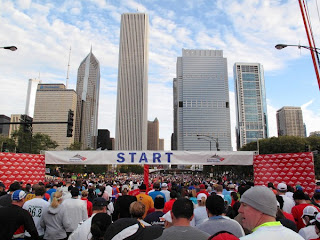 About a year ago, I announced to my friends and family that I would run in this year's Bank of America Chicago Marathon on Sunday, Oct. 11.As I laid in my bed yesterday with a box of Kleenex tissues, orange juice and Sudafed, I reflected on how much I had let myself down. It wasn't that I got sick and decided not to make the journey to Chi-Town. The truth is, I knew I wouldn't be able to run months ago.

My training schedule had taken a back to seat to my job, obtaining my graduate degree and life in general. Since April, my training schedule had become sporadic and training became more of an annoyance than something I actually enjoyed. I became frustrated by not being able to increase my pace and my constant lethargy due to other medical issues. By September 1, I knew there was no hope in completing the race. My fiance (boyfriend at the time) encouraged me to run half of the race and then hop on the bus to the finish line. Somehow this seemed worse than not competing at all. I didn't want to go to Chicago with the expectation of not being able to finish. I wanted to go knowing I would give it my all until I got to the end.
As I contemplate next years race, I wonder if I'm really cut out for the competitiveness of running. After all, I've never been an athlete at heart and the real reason I started running is because I enjoyed the solitude of it. Not the numbers. It's not to say that I will never run Chicago. Perhaps I was too ambitious. Maybe I needed to start out with a half-marathon. Or maybe I needed to learn not to focus on the numbers despite the people around me. In any case, this small defeat doesn't mean my love affair with running has ended. It simply means that maybe I should take a different approach. After all, it's in the face of humility we learn who we really are and what we're made of. This isn't the end. It's only the beginning.