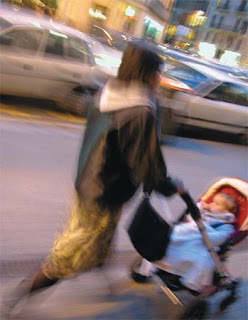 This past weekend, my boyfriend and I had the opportunity to visit some friends and their two and half month old. We decided we would keep the little tyke Friday through Sunday, keeping him overnight on Saturday night.

Now, there's a few things wrong with this picture. First, I didn't think I had a maternal bone in my body. Turns out, I'm a natural. Secondly, Kristopher (the boyfriend) doesn't have much experience with babies either. (Boy, was I proven wrong) and third, we'd be crashing in a hotel for the entire weekend (which meant food and exercise options were limited).

Needless to say we survived the weekend, and I have a new found respect for mother's (especially single moms) and I have a little more sympathy for the moms who haven't quite lost their extra pregnancy pounds. As I was initiated into motherhood for a short period of time, I realized new moms have a lot working against them. If they can barely sleep, how in the heck are they supposed to fit in exercise and healthy eating? But, this was great practice. I learned from my mistakes and when I do become a mom, I know where not to go wrong.

But first, let's take a brief recap of my weekend.

Thursday: Overslept so there wasn't time to fit in a workout. Spent all day packing and cleaning. Headed to airport around 3pm PST. Boarded at 5pm PST. Landed at 10pm CST. Dinner? Forced to eat Perkins. (yuk) One and 1/2 flapjacks.

Where it went wrong?: Not waking up on time and working out. Pancakes at 11pm.
Next time?: Working out should have been the first thing I did. Next time prepare to eat dinner before boarding the plane or packing a healthy dinner for the plane ride.

Friday: Up at 7 a.m. for tyke's arrival. Breakfast from hotel lobby. Fruit and bagel. Hit Mall of America for some shopping. Lunch at the Nordstrom Cafe. Back to hotel room to drop off tyke. Dinner at Spill the Wine in downtown Minneapolis (salad and glass of vino). Post dinner drinks at Seven (beer and tequila).

Where it went wrong?: This is where my "more compassion for new moms" comes into play. I was up at 7 a.m. when the tyke arrived. Between getting ready, feeding, burping, changing and getting in a nap, there was NO time for a workout. Breakfast was decent with fruit and a bagel. Lunch at the Nordstrom Cafe wasn't bad either with a kid's grilled cheese, tomato soup, fruit and water. I think I get extra points for the shopping excursion and clocking at least half a mile. Dinner wasn't half bad either. Although I should have skipped the vino, tequila and beer (nightmare waiting to happen), when you've been with a two month old all day, all three are in order.
Next time?: Again, workout comes first. If I knew the little one would arrive at 7 a.m., I should have hit the streets at 6 a.m therefore. Other than that, I think I did pretty good.

Saturday: This is where it gets hairy. Baby arrived at 9 a.m. Kind of hungover from the night before so I didn't get in a morning workout. Breakfast in hotel lobby. One pancake and coffee. We retreated to room because baby has terrible gas and is fussy for most of the day. We hung out in hotel room until 3 p.m then off to outdoor festival. Forgot about lunch which means festival food. Soba noodles (not too bad). Back to hotel to rest. Baby was fussy again. I took some "me time" to go read. An hour later, back to find a fussy baby. Baby gets a bath, food and rocked to sleep. Time? 10pm. What happened to dinner? Delivery from local pizza joint. Off to bed to try to get some sleep.

Where it went wrong? Again, lack of planning. I shouldn't have drank the night before and should have turned in early. Breakfast wasn't terrible nor was the festival food. I should also mention we walked a good mile during the outdoor festival. All in all, not a bad day. The worst part? Pizza at 10pm. By the time I ate, I was starving and I ate almost the entire pie. Losing track of time will get you EVERY time.
Next time?: No drinking and think about dinner earlier in the day so it's not a last minute decision.
Sunday: Rough night. Workout out of the question. Packed for plane ride home. Got tyke washed up and fed. Brunch with friends. Stomach was acting weird, so bowl of fruit. Dropped off tyke and then off to the airport. Lunch? Airport food....nachos. Dinner? Bagel and peanut butter.
Where it went wrong? Is there anything right about this picture? Okay, the fruit. Lack of sleep plus, weird stomach equals bad decisions.
Next time?: Breakfast was okay. Should have chosen a better option at airport or packed a lunch. Dinner should have been something more substantial and more healthy.
So, what have I learned and, more importantly, what are some things that new moms can do to lose the extra pounds and stave off additional lbs? Stayed tuned for part II.