Reader Inquiry: How Do I Start Running Part 1

After I posted that I would be running in my first race, I received a message with the following question:

Found your blog through Twitter. Never been a runner, but always wanted to give it a try. Any tips to a beginner?

I have tons of tips for beginners! I think I should preface this by saying, I've never been the "athletic type". I played Junior Pro basketball when I was in elementary school, but wasn't too successful because growing up I was, as my mom says ,"big boned" (which by the way the concept of being "big boned" is totally FASLE!). I played soccer for one day in high school. Needless to say I could barely keep up with the girls and when I finally made it around the track the coach empathetically said " You have a lot of work to do." Sadly that was my last and final attempt to be athletic.

That is until a few months ago when my boyfriend kept encouraging me to run a marathon. I kept shrugging it off and agreeing to run mostly for entertainment purposes, but he called my bluff during Christmas. He presented me with two marathon training books. My family was perplexed as I feebly tried to explain what it all meant. I realize I haven't answered your question yet, but patience is a virtue. 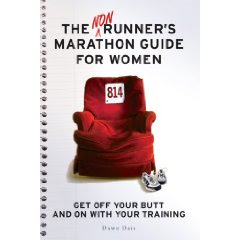 My running began with the two books he gave me. The first was The Non-Runners Marathon Guide for Women: Get Off Your Butt and On With the Training by Dawn Dais. The other book was The Beginning Runner's Handbook: The 13-Week Walk-Run Program by The Sports Medicine Council of British Columbia. Both helped me get a basic understanding of running and all that's involved (the gear, what to eat, training schedules, etc.). Both are great reads and reading them bought me a few weeks before my actual training began. The Non-Runners Marathon Guide gave the real and unedited perspective of a new runner. You learn new words like chafing and phenomenas like why wearing spandex is perfectly fine for runners. 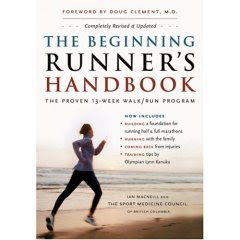 To begin your training, I would suggest training for a particular race. First it gives you an event to work towards and you're more likely to start a routine if you have a goal in mind. Secondly, it will help you develop a schedule and keep you on track. Third, it feels pretty great telling your friends you are training for a race. But keep in mind, you aren't doing this for speed. You're simply "competing" to finish and to keep running interesting, because yes, it can get boring. Hard to believe I know.

This should be just enough to help you get your laces tied and your feet outside the door. Stay tuned for Part 2 on taking the second step.

Both books can be found at your local bookstore or at Amazon.com.